The Kansas City Royals are on the verge of flushing the Mets right out of the World Series. That’s right. You heard it (or read it) first right here at http://www.Godandsports.net. The Mets put their best pitchers up against the red hot Royals, and the Royals rolled and the Mets were mauled in KC like it was nobody’s business. Because this year, it seems like a win for the Royals is in the cards.

The Houston Astros couldn’t stop the Royals. The Toronto Blue Jays couldn’t oust the Royals. Then the Mets sent Matt Harvey and Jacob deGrom out to squash them in the first two games of this World Series. And what did they learn? This is a team you just can’t squash. Apparently.

So the Royals are now two wins away from their first parade in three decades. They put a 7-1 shellacking on deGrom and the Mets and whaddaya know, they’re now up, 2 games to zip, and it’s not lookin’ good for the “other” New York baseball team from Queens.
Last year, the Royals took Madison Bumgarner and the San Francisco Giants to 7 Games before falling to the eventual Series MVP. Last year, “Madbum” https://godandsports.net/2014/10/30/you-too-can-be-a-rock-star-just-ask-madison-bumgarner/ ravaged the Royals and pitched Game 7 on 2 days’ rest. So, you could say that had not Madbum stood in the way, the Royals would be on their way to back-to-back World Championships, with maybe many more to come.

The Royals are proving how good they are. And the Royals are doing what Christians should be doing: proving the world wrong. Actually, we should be proving our God right and proving how good our God is. If our God is the God of Abraham, Isaac and Jacob, the God of Moses and Miriam and David and Deborah and Esther and Elijah and Peter and Paul, then we have nothing to worry about when it comes to defeating our enemies and foiling our foes.

It doesn’t matter what other players have in their hand; we have a royal flush. That means we’ve got the best Supreme Being there is to have. If our God, the God of the Bible, is truly the True and Living God, then we are “playing” and living with a royal flush.

Madison Kyle Bumgarner is no Bum. In fact, he’s a Rock Star. He’s a first rate, first class, fearless ace and future All Star pitcher who’s achieved rock star status. Bumgarner practically won the 2014 World Series all by himself. He carried his teammates on his back as his San Francisco Giants won the Fall Classic by rolling right by the Kansas City Royals in seven games. The series went the distance but it really wasn’t that close, at least when you factor in Bumgarner.

Madison Bumgarner, after dominating the Royals in Game 1 and throwing a shutout in Game 5, finished the Royals off in Game 7 with five shutout innings, allowing only two hits while striking out four and allowing no walks. He earned a save for his efforts and won the MVP for his heroics.

In an era of hyperbole and overreaction, Bumgarner’s performance in this series needs no beautification. It truly was one of the greatest World Series pitching performances, ever. He’s 25 years old and he pitched his team to victory with two wins and one huge, 5 plus inning save. And so the difference between Bumgarner and any other pitcher begins and ends with how he sees himself. Madison Bumgarner, is nicknamed “MadBum;” mad meaning crazy and bum meaning he’s a scrum. But he doesn’t see himself that way. 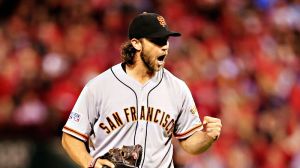 Some time ago, a reader asked me to write more about a blog I wrote some time ago, entitled, “Perish in the Past, or Flourish in the Future.” We all tend to live in the past. We all tend to relish the past, to relive the past, and reminisce on, you got it, the past. That’s called history. It’s past us, it’s gone and it’s not coming back. Bumgarner, by his heroics and Houdini like, legendary and historic performance, taught us again how to dwell on the here and now.

We need to learn to live in the moment. We need to learn how to see ourselves; not losing or limping or lacking, but winning, and warring and walloping all that is evil and vile, all that is crooked and corrupted, and all that is jagged and twisted. We should be setting spiritual records; not chasing them, but shattering them, just because we can.

So you too can come to rock star status. Just like David. Once a back-woods shepherd of his father’s sheep, David achieved rock star status after his date with destiny when he galloped Goliath. His poise perched him much higher and much further than he ever dreamed, and this is the same destiny and doctrine that we should expect and exemplify ourselves.

“. . . He that is feeble among them at that day shall be as David; and the house of David shall be as God, as the angel of the Lord before them.”
Zechariah 12:8, KJV