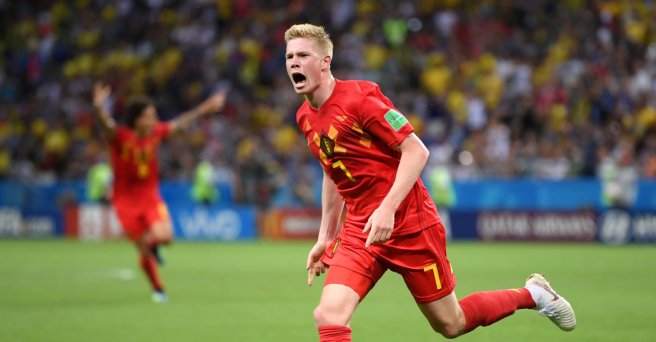 In a stunner, Belgium defeated heavily favored Brazil and advanced to the “Final Four” of the 2018 FIFA World Cup. And I watched in absolute horror as Brazil out shot Belgium 27 – 10 and still lost. Shots on goal sailed high and went wide as one scoring opportunity after another went by the wayside.  Brazil had their chances, but still couldn’t get it done. The Boys from Brazil outplayed, out passed but couldn’t outscore the brothers from Belgium, and it was a sight to see.

Four years ago Brazil lost AT HOME in the 2014 World Cup to Germany 7-1, and that was a gut wrencher. I saw that match too (ya gotta know which games you just HAVE TO watch). This time out, the Boys from Brazil, namely Neymar and company, were supposed to avenge the blood of their 2014 brothers, but the Russian soccer gods would have none of it. Yes this game is spiritual. How else can you explain the Brazilians missing shot after shot on goal, and then the Belgium’s, with just five measly shots on goal, winning the game with two goals, one of which was an own goal.

This is why we love sports. This is why we learn life lessons from the games. And this is why we believe in upsets, comebacks and turnarounds. I TOLD you to watch this one! So much for the commentary; here’s the play by play from Rob Harris, NBC Chicago:

“Belgium reached the World Cup semifinals for the first time in 32 years by holding off five-time champion Brazil 2-1 Friday, sending Neymar home without living up to the expectations of being soccer’s most expensive player. Belgium scored the decisive goal on a counterattack just after a corner had been taken by Neymar. Romelu Lukaku surged forward with the ball and Kevin De Bruyne put it in the net to give Belgium a 2-0 lead in the 31st minute.

‘This was the biggest test for us,’ De Bruyne said. ‘Brazil was so strong in attack.’

The opener came after a bit of good fortune. Fernandinho’s trailing arm inadvertently helped Belgium captain Vincent Kompany’s header land in his own net in the 13th minute.

As Belgium lost cohesiveness in the second half and Brazil’s changes stirred the team, substitute Renato Augusto reduced the deficit in the 76th with a header.  But it was too late for Brazil to muster an equalizer as efforts to force the game into extra time were thwarted by Belgium goalkeeper Thibaut Courtois.

For the third time in a World Cup — after 1982 and 2006 — the semifinals will feature only European teams. Belgium and France will meet in St. Petersburg on Tuesday. The next day in Moscow, it will be either England or Sweden against either Russia or Croatia. The other two quarterfinal matches will be played Sunday.”

So who do we route for now? Go Croatia!