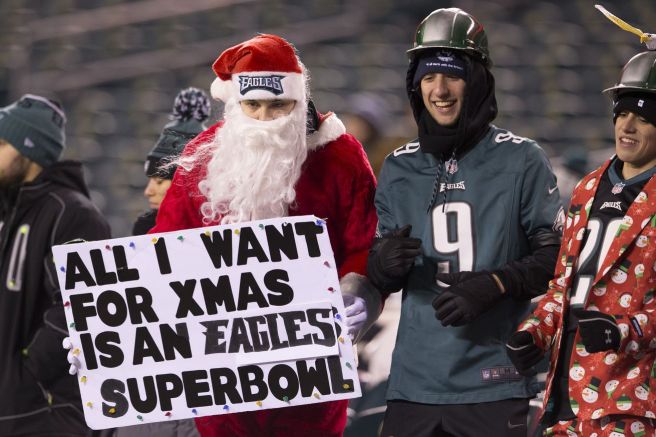 This is a 1991 Christmas film that you’ll have to tell me about, because I’ve never seen it. According to IMDb, the plot summary goes like this: “While newspaper writer Church struggles with the death of his wife, he receives a ‘special’ assignment. He must answer a little girl’s question about whether Santa Claus really exists. It’s based on a true story.”

And the Eagle’s win against the Oakland Raiders on a frosty, Christmas Monday Night proved once again that miracles are possible, and they do in fact happen.  And if backup QB Nick Foles and all of Philly ever needed a miracle, tonight was the night. Foles looked horrible, and did everything possible to lose this game.

On a cold winter’s night in late December, the Eagles had a chance to sew up home field advantage in the playoffs. But they were flat and cold and they ran into a buzzsaw of a running back that’s torched them before.  Enter Marshawn Lynch and the Oakland Raiders with nothing to play for but to be a spoiler.

And spoiler they nearly were. Both teams played ugly and gritty, neither looking like they wanted to win. In fact, this was probably the worst the football team from Philly has played all year, and yet somehow, someway they pulled off an undeserved win.

Ever been on the plus side of an undesirved win? It’s better than beeing on the wrong side of the tracks. And it makes you awfully grateful.

All jokes aside, isn’t what God did for us on the first Christmas equally undeserving? The first Noel was to lowly shepherds, signaling the coming of grace to the least of all.

It just goes to show ya; you can be down but you don’t have to be out. You can look bad and still come out clean. You can lose battles and still win the war. And you can make mistakes and deserve defeat and still, with the help of the God of Heaven, gain the victory.

Santa Claus is the holly, jolly, giving, loving and caring saint who indeed lives in the hearts of every child and every child at heart. And so I’m offering this simple phrase, to kids from one to ninety-two; miracles can and do happen.