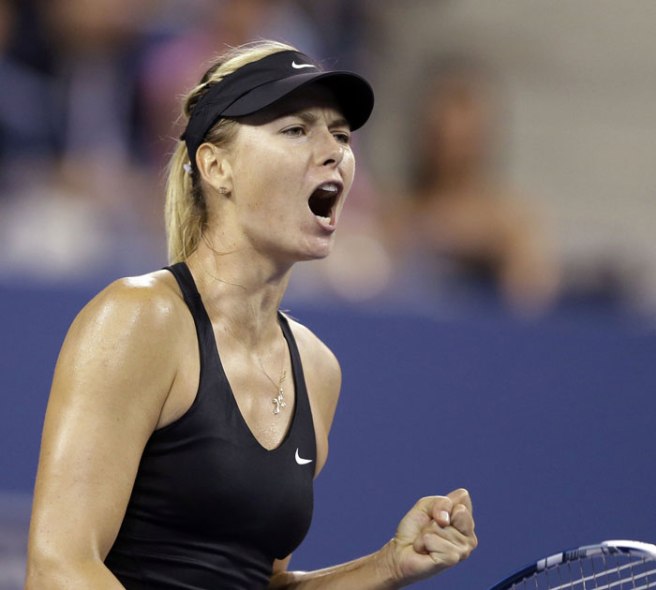 Maria Sharapova.  Period. End of discussion. She’s more than cute, she’s courageous. She’s a dodgy, dainty dame who can play the game of tennis like nobody’s business. Now, in front of the entire tennis world, she’s mounting a comeback after being out tennis for 15 months for doping. And if you love sports, you’ll love watching a true champion play poorly and yet still win successfully, even on a bad day (or night) at the Office.

Maria Sharapova defeated 18-year-old Sofia Kenin 7-5, 6-2 last night in the third round of the U.S. Open at Arthur Ashe Stadium, the Open’s version of center court. The victory wasn’t clean, but it was conclusive, and some points were a thrill to watch.

But Sharapova has history and baggage (don’t we all?).  She’s trying to overcome negative, popular opinion and overtake her own prideful propensity to prove to the tennis world that she’s still got it; and so far, she indeed seems to be one of the best tennis players in the tournament.

D’Arcy Maine of espnW.com may have said it best:

“I need to get something off my chest: I have never been a Maria Sharapova fan.

From her former (and in my mind, unjustified) status as the highest-paid female athlete in the world, to her icy demeanor and less-than-stellar rapport with her peers on tour, I’ve always felt she was overhyped. Despite frequent comparisons to, and a lopsided head-to-head record with, Serena Williams, she’s nowhere near that level.

And when she got suspended in 2016 for doping, it only fueled my disdain. On top of everything else, she was using banned substances, too?

As you might imagine, I wasn’t exactly rooting for her to come back. She returned in the spring to much fanfare, but excitement quickly faded as she failed to receive a wild card to the French Open and was hampered by injuries for the rest of the summer. I didn’t feel sorry for her, and, frankly, I didn’t miss her.

Then, on Monday night, Sharapova made her post-suspension Grand Slam debut after receiving a wild card to the US Open. Playing in front of a packed and animated crowd at Arthur Ashe Stadium on opening day, the unseeded Sharapova faced No. 2 Simona Halep. As the match began, I was rooting firmly for Halep.

But then a funny thing happened.

Sharapova impressively won the first set, and I found myself admiring her play and her gutsy resolve against one of the best in the game.

Halep came back to win the second set. But there was something about Sharapova’s tenacity, and all the emotions visibly strewn across her face, that was compelling. It looked like a different Sharapova than we had seen before. While her skill set has always been revered, for the first time, she was showing us just how much she wanted to be there.

When she finally closed out the match after an exhausting 2 hours and 44 minutes, she fell to her knees and cried. I couldn’t believe it. Was this the same Maria Sharapova, who was allowing all of her emotions to show as she fought for a win?

It may have just been a first-round match, but it looked like she just won the title. It was (gasp) … sort of inspiring.

As she took her seat on the sideline, she couldn’t control herself and held her head in her hands and sobbed. Meanwhile, I was thinking to myself, “Damn it, Maria! Don’t make me root for you!” But it was too late. I had been pulling for her for at least an hour without even realizing it.

‘I just thought this was another day, another opportunity, another match,’ she told ESPN’s Tom Rinaldi after the victory. ‘But this was so much more. You can’t control your emotions. Everything you go through is worth it just for this moment.’

As tennis fans, perhaps we needed to see and hear that from her. For once, she acknowledged her own feelings, and more importantly, her vulnerability. It was humanizing, and maybe even relatable. (Until, that is, she talked about the Swarovski crystals on her dress, but I’m going to let that slide this time.)

The reality is, it’s the human emotion, triumph of spirit and fragility of it all that makes sports so great in the first place. We need our athletes to want it as badly as we do from our seat on the couch. While Serena Williams makes cheering for her easy because she seems to live and breathe with every contested point, Sharapova’s previously cold disposition sometimes made it difficult to connect with her. Monday perhaps finally revealed the truth — she does care and isn’t afraid to let everyone know. And that makes her infinitely more likable.

Not only is Sharapova’s story one of redemption and determination — two things I’m always a sucker for — but it also makes this tournament a heck of a lot more fun. With the absence of Williams and the early elimination of Halep and defending champion Angelique Kerber (not to mention everyone else who’s out on the men’s side), the US Open is somewhat lacking in its usual drama and star power.

But with Sharapova, we have someone to get behind — or, for those who still haven’t come over to the dark side, against. Either way, we’ll be watching.”