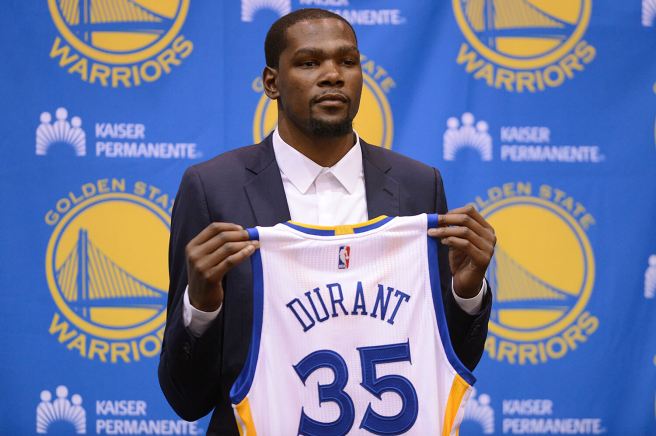 This is the Finals we’ve all been waiting for: The Warriors vs. the Cavaliers, and now the Warriors have KD, Kevin Durant. It’s Ali / Frazier III all over again.  And this time, Love and Kyrie aren’t hurt, and hopefully Draymond Green won’t get suspended. So both teams will be at full strength, and we’ll see who’s boss.

As Kobe once said, “to be the best you’ve got to beat the best.” So if you think you’re all that and a bag of chips, you shouldn’t worry who you’re playing. When you’ve got confidence and conviction and assurance and assertion, it doesn’t matter who’s lining up on the other side of the ball.

And the same principle applies spiritually. We who trust in the God of Heaven shouldn’t be worried or concerned when we’re challenged or cornered or confronted or called out. We know we’ve got a God who will fight our battles. We’ve got a God who’s got our back and our front too. We’ve got a God who won’t back down or back up or give in or give out when we need Him most. We’ve got a God who’s not afraid of the enemy or the opposition. Not in the least.  When we have a problem or a glitch or a quandary or a conundrum, our God says “Bring it On!”  We just have to hold on and hold out and not give up.

So wake up! It’s time to watch NBA Finals, and these Finals should show some of the best basketball ever. And if I fall asleep during one of those late night games, it will be because it’s way past my bedtime, not because one team is playing bad ball. But the action and the excitement and the drama should be enough to keep me awake, right?

The plot is thick and subplots are plenty. Will Durant get his ever elusive championship ring after jumping ship and leaving the Thunder behind and joining the Warriors? Will LeBron win back-to-back championships in Cleveland, after starting his career there before jumping ship and going to the Heat to win two rings on South Beach?

And will these be the best Finals ever?