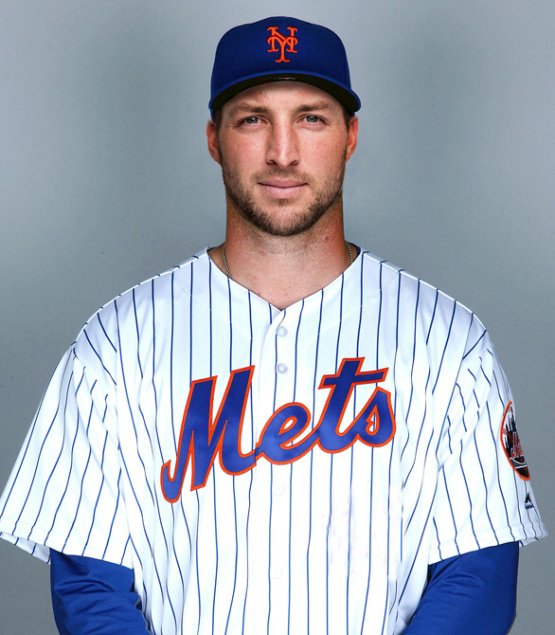 This is an excellent post from ESPN’s David Fleming, so I’m sharing it it’s entirety:

TIM TEBOW’S FIRST day of spring training unfolded pretty much exactly as expected. Before he stepped foot onto First Data Field in Port St. Lucie, Florida, his $28 Tebow 15 jersey was already available for purchase outside the ballpark. There was touching chatter about the joys of pursuing his “childhood dream” of playing baseball, not to be confused with his currently on hold “lifelong dream” of being an NFL quarterback. Many experts, after making a special point to say how nice and hard-working Tebow is, admitted that the guy who struck out 20 times in 62 at-bats during the Arizona Fall League didn’t look any more comfortable or natural as a pretend baseball player.

None of that, of course, stopped networks, including this one, from running video of Tebow crushing home runs during his first batting practice session, titillating footage that has only slightly less correlation to actual baseball performance than sunflower-seed spitting. And, predictably, before the day was through, the New York Post had dubbed Tebow “a much more athletic Garth Brooks” while judging this spring training experiment to be Tebow’s latest, greatest feat of athletic failure. It was a declaration that Tebow seemed prepared to handle better than any curveball he has faced.

“There are certain things in life we love and we have the chance to pursue, but a lot of the time fear of the unknown, fear of failure gets in the way,” Tebow told Marty Smith on SportsCenter at the start of camp. “If I fall flat on my face, then guess what, I’m going to get right back up again.”

It’s a mantra that has sustained Tebow over the past five years. On Jan. 9, 2012, Tebow threw for 319 yards in a stunning 29-23 overtime win against an injury-depleted Pittsburgh defense in the AFC wild-card playoffs. Since then, though, he has grifted his way to untold riches and largely unearned opportunities with five franchises in two professions while barely bothering to alter his act. First, NFL quarterback was the dream he would relentlessly pursue, then — nope, hold up, wait a minute — it was actually baseball the entire time. In both sports, he has benefited from the same viral coverage to cloak his shortcomings, co-opted the same kind of devout “experts” to vouch for his authenticity, shown the same lack of humility and understanding of the challenges he faced, and, worst of all, exploited the same needs and dreams of fans in both sports.

What continues to make him one of the most puzzling and compelling athletes of his era, though, is not the long string of embarrassments, but rather, what seems to be Tebow’s absolute fearlessness in the face of Mets spring training, a challenge that is almost certainly going to be his greatest, most public humiliation yet.

“People will say, ‘What if you fail? What if you don’t make it?'” Tebow said at the beginning of this process. “Guess what? I don’t have to live with regret. I did everything I could. I pushed it. And I would rather be someone who can live with peace and no regret than being so scared I didn’t make the effort.”

Whether you think that’s enlightened or idiotic is up to you.

TEBOW HAS BEEN transformed into shorthand for fans, an instant litmus test. Are you a fellow dreamer and believer? Or are you one of those cold-hearted realists who worry about the minor league player who had his spring training roster spot stolen by Tebow’s publicity stunt?

In a way, he has even become a counter-culture icon, unafraid and unharmed by failure in an increasingly perfectionist society. It’s a place where icons such as Pittsburgh Steelers linebacker James Harrison confiscate their kid’s participation trophies and up to 75 percent of kids drop out of sports before age 14 because of a fear of failure. And so, what might be at the heart of the latest chapter of our ongoing infatuation with Tebow is the utterly unsettling way he has embraced, perfected and, yes, profited from the art of failure.

It would certainly explain this latest campaign, why at 29 he’d be so gung-ho about publicly attempting the most difficult challenge in sports — hitting Major League pitching — after more than a dozen years away from the game.

“I applaud what he’s doing. So many of us are crippled by high expectations that we tend to quit things way too early,” says Mark Anshel, a professor emeritus at Middle Tennessee State and the author of “In Praise of Failure.” “I think Tim Tebow knows exactly what he’s doing. If helping people deal with failure is how you believe you were called to serve God, then I’d say attempting to become a professional baseball player out of the blue at 29 is the absolute best place for him to be.”

Tebow ‘not going to worry’ what people think

On the first day, Tim Tebow spoke with his trademark smile and charisma, Tim Tebow added a new line to his resume: spring training attendee. What did the QB-turned-outfielder say at Mets camp, and how many BP homers did he blast?

Since the 2012 NFL playoffs, Tebow’s business as a pro athlete has been failure — and business has been good. After a brief, brilliant flash of success, the Broncos grew tired of his terrible throwing mechanics and struggles with the cognitive side of the game, and Tebow agreed to a trade to the absolute worst possible spot for a developing quarterback: the New York Jets. Tebow’s act of self-sabotage resulted in him completing just six passes behind Mark Sanchez and Greg McElroy before being cut by Rex Ryan.

Not only did Tebow make the same choice when it came time to pick a baseball team, at both stops he also used his popularity and the ravenous media coverage, including a good share of it from yours truly and the rest of ESPN, to take the attention off his on-field struggles. No one remembers that on the first day Jets camp was open to the public, Tebow was so bad he completed just three passes while fans heckled him and coaches worried that he wasn’t a viable option to replace Sanchez. Instead, the only thing we remember about Tebow as a Jet was the shirtless QB jogging across the field in the rain after practice. Similarly, no one knows that Tebow went 0-for-3 in his Arizona Fall League debut or that scouts knew right away there was zero justification for his roster spot — a gift he honored by keeping his TV gig on the side. No, we remember him “saving” a fan who collapsed during an autograph session.

When his first stop in New York was over, an NFL scout told me the truest thing I have ever heard about Tebow’s athletic career. And it remains just as true in baseball: It is nearly impossible to find a teammate who will say anything bad about him as a person, or a scout who will say anything good about him as a player. “He’s a tough guy, a great leader, a great person,” an NFC scout said at the time. “He’s just not a quarterback.”

It didn’t matter. In fact, it only helped Tebow develop his brand: Failure Incorporated. The next summer, after he was unceremoniously let go by New England, Tebow vowed to go to the ends of the earth to make himself an NFL quarterback, a pledge that apparently did not extend to Canada or Orlando, where he had standing offers to hone his QB craft in the CFL and the Arena League. Stooping to play fullback or tight end, where he worried he would no longer be everyone’s focus of attention inside the huddle, was out of the question too. (And yet we believe this same guy intends to spend his summer in Single-A ball, riding a crowded, stinky bus, grinding his way through 140 games in 150 days?)

In parting ways with the Patriots, Tebow tweeted 2 Corinthians 12:9, which says, in part, that “power is perfected in weakness” and, therefore, the best way to have Christ’s power dwell inside you is by boasting of your weaknesses. This seems to be the moment where Tebow was able to meld his rapidly dwindling prospects as an NFL quarterback with the universal connection to, and the spiritual rewards of, failing with honor and purpose — sometimes over and over and over again.

Despite an abundance of critics, Tebow has remained steadfast in his endeavors. The fear of failure is not something that dictates his path. Rich Schultz /Getty Images

IN 2014, TEBOW turned to former NFL quarterback Trent Dilfer for tutelage and support. Dilfer and passing guru Tom House worked to improve Tebow’s throwing mechanics at the University of Southern California. But like millions of Tebow supporters, Dilfer might have been unable to separate his fondness for Tebow the man and his evaluation of Tebow the quarterback.

“This is one of the greatest players to play college football, and he didn’t know how to pass,” Dilfer raved on ESPN at the time. “I believe now he knows how to pass. Every GM, every scout, every person out there should go at least watch Tim Tebow now, because it’s a different guy.”