San Francisco 49ers backup quarterback Colin Kaepernick has started a movement.  And his followers are growing.

A number of players on other National Football League teams have joined Kaepernick and also taken a knee during the anthem; while others have raised clenched fists while standing, including New England Patriots Martellus Bennett and Devin McCourty, as another way to silently protest.

And protesting during professional football games has trickled all the way down into the high-school ranks, as Doherty Memorial High School junior Mike Oppong took a knee during the national anthem Friday in a season-opening game against Leominster at Commerce Bank Field at Foley Stadium in Worcester.

On Sunday, Oppong tweeted to his followers on Twitter that “My coach just called me a couple minutes ago telling me that the coaches and principals decided that I should be suspended for 1 game.”

A #FreeOppong hashtag started spreading like wildfire on Twitter after Oppong announced he would be suspended for his protest. There was positive feedback and support for Oppong on social media and some hate, however.” 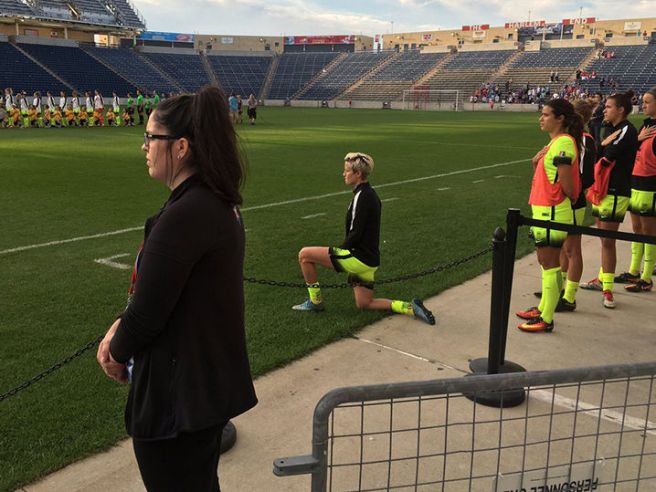 And here’s what Leonard Pitts Jr. of the Detroit Free Press Printed:

“It keeps getting bigger.

One might have expected last month’s protest by San Francisco 49ers quarterback Colin Kaepernick, his refusal to stand for the national anthem, to have blown over by now. Instead, it has caught fire. Sunday, members of the Miami Dolphins, New England Patriots and Kansas City Chiefs all staged protests of their own. This was in addition to earlier protests by soccer star Megan Rapinoe and members of the Denver Broncos and Seattle Seahawks. There have even been reports of the phenomenon spreading to high school and college games.

All of this in support of Kaepernick, who said, “I am not going to stand up to show pride in a flag for a country that oppresses black people and people of color.” Apparently, he’s struck a nerve.

For the record, yes, I do stand when the anthem is played. But I don’t do it for America. America breaks my heart on a daily basis. So, I stand for what America is supposed to be, what America could be if it ever took seriously its founding principles, including that “self-evident” truth about equality. But America has yet to do that, and Kaepernick is hardly the first person to notice.

Un-American? Colin Kaepernick is anything but that.”

And  Colin Kaepernick said this:

I don’t want to kneel forever.”

On the last night of his life, Martin Luther King said:

All we say to America is, be true to what you said on paper.”

Kaepernick is not even the first athlete to snub the rituals of American patriotism and refuse to “stand” for the National Anthem. This is what one baseball player had to say:

I cannot stand and sing the anthem. I cannot salute the flag; I know that I am a black man in a white world.”