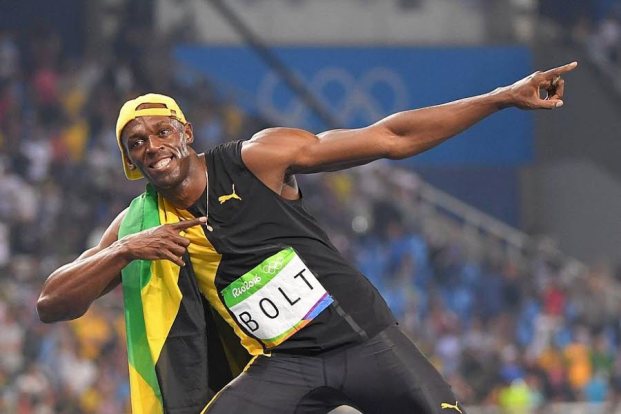 Usain St. Leo Bolt has beaten the best and he’s ravished the rest. He’s conquered his counterparts at every turn. And this is only part of his allure.

Usain Bolt won the 100m dash. Then he won the 200m dash. And THEN he crowned these Olympics off and capped the Games of XXXI Olympiad with a crowning, royal diadem of a 4 x 100m dash performance for the ages. Just as we love to watch a deer run through the woods and watch a cheetah race across the plain, so we love to watch Usain bolt down the track.

So what is Bolt’s mystery ingredient? What is Bolt’s secret weapon? Wha does Usain have that the other sprinters lack? (Not counting his extraordinary height, or course.)  First and foremost, Usain Bolt is supremely confident.  Usain’s almost insane confidence is not just in himself, per se; his confidence  lies rooted and grounded in his uncanny ability to transcend the circumstances, whatever they may be, to achieve gold.

Bolt is a believer. He’s a man of faith. But he’s also a man full of fundamentals. He just doesn’t believe or hope or dream; he works hard. He trains hard. He practices long and he strives for perfection.  And he’s sustained this streak of dominance and eminence over time, so he’s no flash in the pan.

Bolt is a boyish “Bella.” His speed and his strength and his gold medals are only icing on the cake. It’s his charm and his charisma, and most of all, his confidence, that are the soul of this human machine, and this surefire assurance is what we love and admire about him the most.