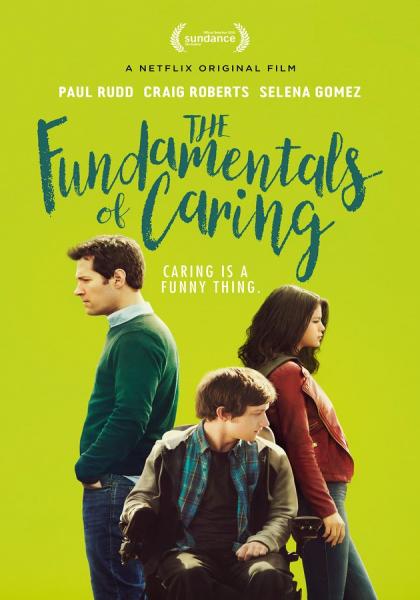 Netflix subscribers, I’ve got a “trending” one that you just have to watch.
If you don’t mind dark comedy and foul language and crass humor, then “The Fundamentals of Caring” is a movie just for you. So if you don’t detest a flippant, untidy, witty and wonderful tale of restoration and renewal, this movie is really just for you. And it’s actually a really good film, full of drama and comedy and emotion and objectivity and crisis and intervention and recovery and redemption. And that’s just the beginning.

Caring is fundamental. That’s one of the lessons the film teaches. In my humble opinion, too many people just don’t care. And to insert a movie quote, some people “quite frankly,” just “don’t give a damn.” And that’s the chronic crisis of our generation. If more people would shed their apathy and put on some empathy, or at least smidge of sympathy, the world would be a much better place.

“So if apathy describes the absence of pathos, then pathos is the opposite of apathy. Alas, pathos, and certainly the adjective pathetic, have acquired quite a negative connotation, and are not generally understood any more as feeling, passionate. So for words that do somehow, in a general way, describe that somebody is actively feeling about things around them, I would suggest passionate as an option. And passionate is defined as having, showing, or expressing strong emotions or beliefs.

It seems interesting, when we look at the origin of passion, that pathos has moved from general (if sometimes suffering) emotional engagement towards a negative, mainly suffering meaning in English, whereas passion, originally mainly meaning suffering, has moved towards a more general, and certainly nowadays positive meaning. I don’t think that most speakers of English will associate someone’s passion for human rights with the passion in the passion of Christ.” http://english.stackexchange.com/questions/187649/antonym-of-apathy
But that is exactly where “Fundamentals of Caring” is leading us.

“Fundamentals of Caring” has all the makings of a Sunday sermon (minus the language) tied in a nice, neat, trim and slim movie picture package that’s worth more than its weight in gold. The night of darkness must, as with all redemptive stories, yield to the light of day and the delight of deliverance. And such is the case with “Fundamentals.” In the end, the beginning finally makes sense. And that is where faith comes in. We have to believe that all the incidents and instances and encounters and endeavors in our lives have meaning. They must.

Fundamentally and not incidentally, when your heart is pure and your hands are clean, life’s twists and turns tend to veer and curve and even swerve in ways we would never have dreamed of. And that’s the beauty of following a God that knows the end from the beginning. Again, in the end, the beginning finally makes sense.
And so here’s a critic’s view of “Fundamentals:”

“Attempting to find work and dealing with divorce papers he’s avoided signing for over 2 years, Ben (Paul Rudd) decides to become a certified caregiver. His first job is helping out Trevor (Craig Roberts), a young man with duchenne muscular dystrophy. Trevor lives with his overprotective mother and hasn’t been very far from his house his entire life. Trevor is fascinated with roadside attractions and Ben begins asking him why he doesn’t just go and see them. Trevor claims he doesn’t want to, but suddenly has a change of heart after an argument with Ben. Now the two men are heading out onto the road for one week. Along the way they meet up with an attractive hitchhiker (Selena Gomez) that Trevor becomes infatuated with, and a pregnant woman (Megan Ferguson) trying to get to her mother’s house before her due date.

The Fundamentals of Caring is an odd mixture of dramatic clichés and refreshing originality. It’s not hard to see where things will end up just by reading that synopsis, but while things may lead to where you think, they at least take a unique trip to get there.

Trevor and Ben are exactly the kind of characters you would expect. Ben is dealing with a terrible accident in his past, having difficulty sleeping and simply dealing with the things in his life. Trevor deals with his disability through humor. He’s sarcastic, occasionally rude, and doesn’t mind a few self-deprecating jokes here and there. While these characters are pretty much the definition of road trip buddies in a film like this, their motivations and actions are anything but. This is what makes The Fundamentals of Caring so entertaining.”

Not to mention it’s heartwarming too.