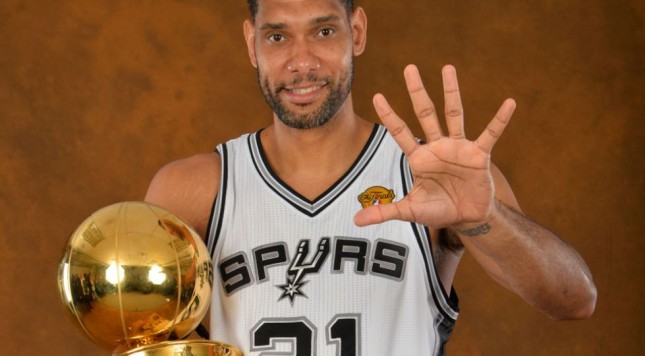 I know it’s time to blog about baseball and the boys of summer and the Olympic Trials and Tom Brady losing his latest appeal regarding “Deflate Gate,” but we must pause because due applause is fitting and proper for one of the all-time great basketball players of our time: Tim Duncan.

Timmy Duncan was solid and steady, sturdy and stable, dependable and reliable, night in and night out. He just came to play and got the job done. Game after game and season after season and championship after championship, Tim scored points and grabbed rebounds and blocked shots. He wasn’t flashy nor was he flamboyant. And thank God for that.

The New York Times reported that “Duncan’s retirement was as quiet as Kobe Bryant’s was colorful and protracted. The Spurs released a statement highlighting his achievements, but without a quotation from the player.” It speaks volumes to how unassuming and unpretentious this humble and yet heroic player was. And what a lesson for all the sports world to follow.

Thanks for 19 great seasons, Timmy. You were one of the best. And boy will we miss seeing you together with these guys.

“After 19 years and five championships with the San Antonio Spurs, Tim Duncan announced Monday morning that he would retire at age 40.

Duncan was an elite player on an excellent Spurs team for his entire career. The Spurs made the playoffs every year in his tenure, never with a winning percentage lower than .610, and won five titles, with Duncan the finals’ most valuable player in three of them. He also won the league M.V.P. Award twice.

A relative latecomer to basketball growing up in the Virgin Islands, the 6-foot-11 Duncan was initially a swimmer. He was the No. 1 pick in the N.B.A. draft after four years at Wake Forest. (The Spurs had the top pick as a result of a rare down season largely caused by an injury to David Robinson.) The player selected just after Duncan, Keith Van Horn, has been out of the league for a decade.

Duncan initially starred in a “twin towers” lineup with Robinson, winning two titles. After Robinson’s retirement in 2004, Duncan carried on as the team’s star, winning three more N.B.A. crowns, most recently in 2013-14 over the Miami Heat in LeBron James’s last year there.

Duncan’s low-key nature often kept him out of the spotlight, but the sheer force of his accomplishments pushes him onto just about every list of the greats.

Duncan’s playing time had gradually been reduced in recent years, and he had ceded his starring role on the Spurs to Kawhi Leonard. Though he started 60 of the 61 games he played this season, he hit career lows in just about every category. But he was an All-Star as recently as 2015.

Duncan’s retirement was as quiet as Kobe Bryant’s was colorful and protracted. The Spurs released a statement highlighting his achievements, but without a quotation from the player.”