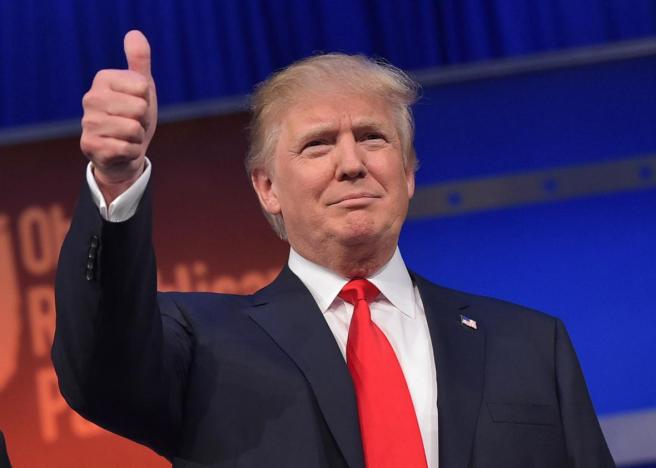 Trump is the Goliath of present politics. And just like in sports, when the bad guy looks mean and mad and menacing, and the underdog looks lean and lanky and listless, it may seem like all hope is lost. And Trump is just like Goliath. He’s big, he’s loud, he’s brash, and he’s brazen, and it looks like he’s going to win. And if he does, God help us.

Yes we’ve all hated the “Goliaths” of sports: the New York Yankees or the Boston Celtics or the “Bad Boy” Detroit Pistons or the dastardly Duke Blue Devils. We’ve hated the favored first place team anywhere all the time. But you have to admit that when they whipped and walloped and worn down and beat up the opposition (including our hometown team, for that matter) they most certainly had energy. The question is, was it positive energy or negative energy? Either way, it was energy.

So the question is no longer “Can Trump win?” The Question is “WILL Trump win?” And for all those of you out there that say it can’t happen and it won’t happen and it better not happen and there’s no way it could or should happen, I urge you to think again. I urge you to reach out and run out and race out right now and require every relative and resident you know to register to vote and ensure that he does NOT. Does not win the 2016 general election, that is. Because he’s all but got the GOP nomination locked up. It’s that serious.

Like him or lump him, Trump is an attraction. Like him or not — like it or not, Trump has traction. And he has energy. It might be negative energy, but it’s still energy. Hoping and wishing and wanting him to lose is not going to cut it. It works the same way with you and me, too. Wanting to win and wishing that we win does not ensure that we will win. It’s a good start, but it’s not enough. David is needed to cancel and counter and contradict Goliath.

So, to continue the Biblical analogy, if Trump is Goliath, who’s David? More importantly, where’s David? Maybe we don’t know who he is or where she is because he or she hasn’t been released and revealed to the battle field just yet. If that’s the case, I sure hope that  he or she’s on the way. You will remember that David came off the sideline and out of the shade and out of the shadows and burst into the light and onto center stage after God providentially arranged for the soon to be shepherd king to be sent to save the day.

So let’s not bemoan and bewail our political situation. Let’s not belittle and bad mouth Trump or any other candidate either. Let’s put our trust in God. In all of our situations, let’s pray that God will send us a deliverer. When our team is down and our winters’ are brown and our face wears a frown, let’s continue to hope and to pray that God will turn it around, and send David, or send US to be the David. Because He did it before, and He can do it again!