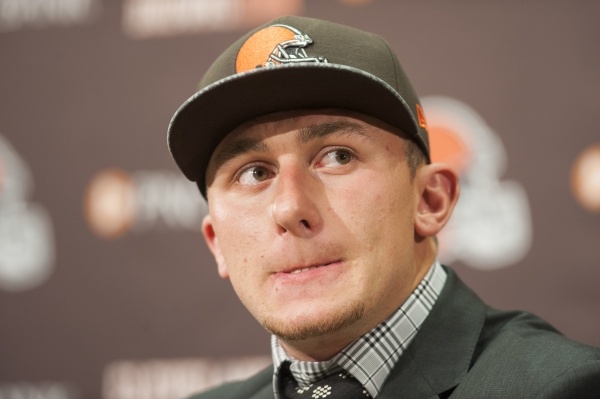 Ever seen a train wreck or a multi-car accident? How about one involving an athlete? I mean one without a train and without cars. This one has skid marks all over the field and all over the railways and roadways leading to the stadium. That’s the picture of Johnny “Football” Manziel.

Manziel has been unable to stay out of trouble since the Browns selected him in the first round of the 2014 NFL Draft. According to some sources, his father and ex-girlfriend and former agent have all expressed and voiced and registered concerns about the party-hardy Heisman Trophy winner.

“I truly believe if they can’t get him help, he won’t live to see his 24th birthday,” Paul Manziel told The Dallas Morning News. That’s Manziel’s dad.

In October, Avon (Ohio) police pulled over Manziel after an altercation with Coleen Crowley, Manziel’s ex-girlfriend. She told police that Manziel “hit me a couple times” after she threw his wallet out of the car window. She declined to press charges and Manziel denied hitting her.

In late January, Crowley said Manziel acted like he was on drugs but not intoxicated during a January 29th incident, according to the police report. He also allegedly dragged her by her hair, forced her into a car and told her to “shut up or I’ll kill us both,” WFAA-TV (Channel 8) reported, citing unnamed sources.

And in early January, quarterback Johnny Manziel was cited for driving with expired license plates last weekend. According to police in North Olmsted, Ohio, Manziel was stopped at 8:28 a.m. on Saturday, Jan. 3, 2016, while driving on Interstate 480.

Then, NFL player’s agent Erik Burkhardt said Friday that he’d dropped Manziel as a client “after several emotional and very personal discussions with his family, his doctors and (Manziel) himself.” Burkhardt went on to say that

Though I will remain a friend and Johnny supporter, and he knows that I have worked tirelessly to arrange a number of professional options for him to continue to pursue, it has become painfully obvious that his future rests solely in his own hands … His family and I have gone to great lengths to outline the steps we feel he must take to get his life in order . . . Accountability is the foundation of any relationship, and without it, the function of my work is counterproductive.

So who do we believe? Who should we believe? The kid won the Heisman, for crying out loud. And yet his performance on the field and his behavior off the field aren’t laudable or commendable but instead are pitiful and contemptible. Manziel has a long list of unworthy, untoward actions not worth any trophy or award, and rumor has it that he will be cut from his current team, the Cleveland Browns in March.

So who wants him now? Who would want him now? Reportedly Dallas does, but that remains to be seen. And so the lesson is clear: Manziel needs to shape up, or ship out. And if any of us acts contrary to any awards or accolades that we may acquire, that goes for us too.