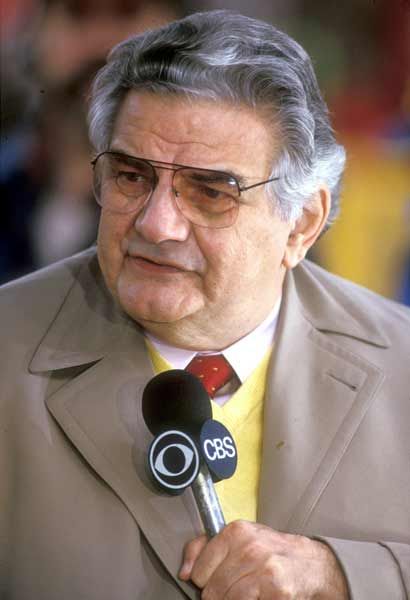 Anybody remember “Jimmy The Greek” Snyder? If you do, read this and reminisce. If you don’t, just know that he was no “Miss Priss.”

Ever stick your foot in your mouth? I mean the whole boot, shoelaces and all? Well, the late great sportscaster Jimmy The Greek did just that. “The Greek” once made a buffoon of himself by making himself a disgrace. He once went on bumbling and blundering and babbling about how Blacks are better athletes than Whites and Asians and Hispanics and any and all other races because of how they were bred in slavery. Wow. Wait, What?  And the SAD part about the statement is that some hate certain athletes because of their race.

But first, who remembers Jimmy?

Jimmy The Greek was a regular for 12 years on the CBS Sunday morning show, The NFL Today, a pregame show for National Football League (NFL) games. Known simply as “Jimmy the Greek,” he would appear in segments with sportscaster Brent Musburger and predict the results of that week’s NFL games. While already famous in gambling circles, his rough charm made him into a minor celebrity. However, . . .

On January 16, 1988, he was fired by the CBS network (where he had been a regular on NFL Today since 1976) after commenting to WRC-TV reporter Ed Hotaling at Duke Zeibert’s Washington, D.C. restaurant that African Americans were naturally superior athletes at least in part because they had been bred to produce stronger offspring during slavery:

The black is a better athlete to begin with because he’s been bred to be that way, because of his high thighs and big thighs that goes up into his back, and they can jump higher and run faster because of their bigger thighs and he’s bred to be the better athlete because this goes back all the way to the Civil War when during the slave trade … the slave owner would breed his big black to his big woman so that he could have a big black kid …

According to the New York Times obituary, Snyder expressed regret for his comments, remarking: “What a foolish thing to say.” His CBS co-workers publicly stated that they did not agree with Snyder’s theories and that they did not oppose CBS’ decision to fire him. Black former NFL player Irv Cross said in the 30 for 30 documentary about Snyder that he worked alongside Jimmy for a long time and didn’t consider him to be a racist at all.

Racism is alive and well in the world, and by association, in the world of sports today as well. But it need not be. Cam Newton is a quarterback, not a BLACK quarterback.  At least that’s the way it should be. Are there white wide receivers and black wide receivers? And is there a difference between the races at every skill position on the field?

Now back to Jimmy the Greek.  What is the lesson to learn from this long lost sports legend? What case has race in the sports workplace? No place! Someplace we have misplaced the knowledge base that sports and athletics are colorblind. Yes sports are colorful. Thank God for the drama and tension and comedy and tragedy and theater and pageantry of sports. And thank God that all of that transcends the color line and breaks the color barrier. Thank God.

We are all human, because we all have some color or some “hue” to us (remember when African Americans were called “colored people?”) We all came from the same God, so that makes us all brothers and sisters. So let’s remember that sports is the great unifier, and that even without sports, we can and should and one day will come together as one, regardless of race, creed or color or ethnic origin. Amen to that.