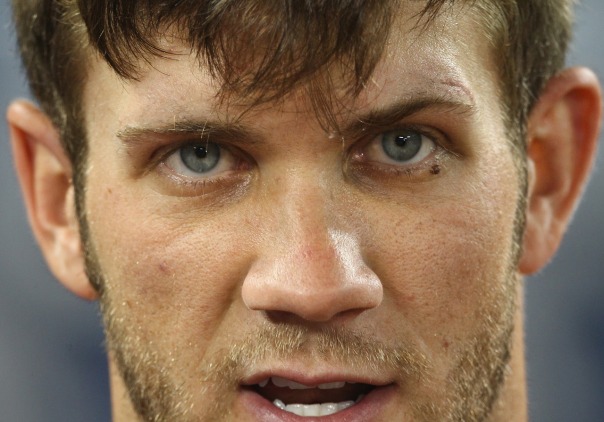 Bryce Harper, right fielder for the Washington Nationals, is a good player on his way to being a great player. He was the 2012 NL Rookie of the Year, he’s playing the best ball of his career, and he has ALREADY been twice named the National League Player of The Week by MLB.  And it’s May. Wow.

That being said, Harper is also known to be somewhat of a hellion. In addition to being on a hitting hot streak, Harper’s also earned a reputation at times for being a hot head, which has now in some way contributed to two ejections during that same stretch.

But for the second time in a week, Bryce Harper and Manager Matt Williams were ejected from a game for an exchange with an umpire. The first came on May 13th, when Harper’s temper clearly got the best of him following a strikeout in Arizona. Following the ejection, Harper launched into a heated tirade against home-plate umpire Rob Drake.

And I witnessed a similar scene play out last night at the ‘ole Ball Game. Harper was mad at a strike call and mad when Home Plate Umpire Marvin Hudson told him to get back in the batter’s box. Harper, being the head case that he sometimes can be, stuck just his BIG TOE in the box, which irked Hudson to no end and caused the ejection. The funny thing is, Harper was in the box until Hudson turned his attention to the Washington dugout. Either way, there doesn’t seem to be nearly enough here to warrant an ejection, but Hudson clearly took Harper’s maneuvering as a dismissal of his authority.

In this case, Hudson could have easily squashed the problem without letting it escalate. By the same token, Harper may have baited a bit by not just getting back in the box. You can find fault in how both men handled the confrontation, but here’s hoping both will be wiser the next time they’re in this position.

But here’s why Harper REALLY got ejected. He said this after the game:

So there. It’s as plain as day and as the nose on your face. If you’re a logical and reasonable and sensible person, you don’t have to be an old-fashioned fart to understand that Harper’s hubbub and hullabaloo helmed from his line of thinking, and his lack of logic is EXACTLY why he got tossed. Harper has an attitude problem. His taunting of the ump by sticking just his big toe into the batter’s box was a clear dismissal and disdain of authority. And, being the Millennial that he is, Harper didn’t see anything wrong with the taunt and the tease.

3 thoughts on “How To Get Thrown Out Of A Game”