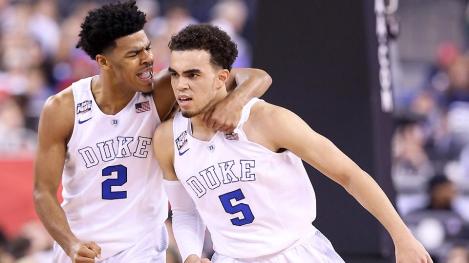 But Why? Why do I have to hate a team that is so great? Why do I deem to dislike and despise and deride and disparage a team that is good ALL of the time, and seems to be great most of a great deal of the time? Just because my team isn’t as good, or can’t beat them, or got beat down by them? Sounds good to me.

Nope. That can’t be right. Seriously, sometimes we don’t even know why we do certain deeds or think certain ways or say certain words.

So why DO people hate certain teams? Why do people yell at the Yankees and the cuss at the Cowboys and loathe the LA Lakers, and detest “le team du jour” . . . DUKE! I mean, they just won another — their fifth — national Men’s Basketball Championship. They came back from nine points down late in the game, and won going away. They have Coach K, the all-time winningest coach coaching today. They have Tyus Jones and they attract the best talent from near and far, and, of course, they’re Duke.

Why do people hate certain winners and love other losers? Why do we root for the ugly team and rile on the pretty team? And why do we hate Duke? So much?

And here’s the tie in:

Why do people doubt and question and suspect and disbelieve God? Because He seems unreachable and unapproachable and unfathomable and undiscernible? Because we don’t like the way things are and somebody’s got to take the blame? Because we don’t have what we want and somebody else finds what we fancy and we are jealous and envious and desirous of what the Dukes of the world have that we don’t? Like hating Duke, these are no reasons to hate and hold out on God.

Duke just proved that you can succeed when you have haters and doubters and cynics and skeptics and everything else in between. So have hope. Don’t sweat it. Don’t hate. Don’t be jealous. Be thankful for what you have and grateful for what you don’t have; and that’s the burdens and the bundles and the baggage that so many other’s do have.