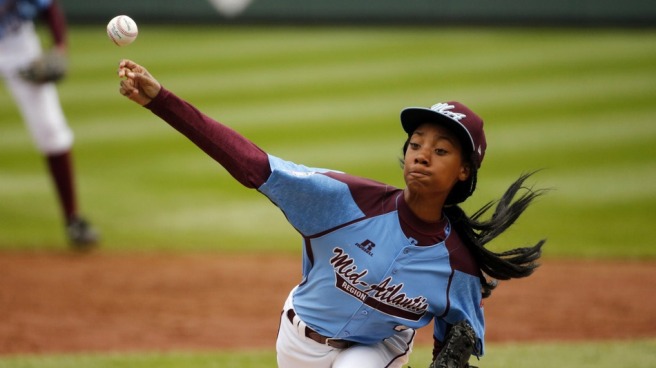 That’s news at any level. Only this time it’s not the majors, or even the minors for that matter; we’re talkin’ the Little League World Series in Williamsport, Pennsylvania, and the pitcher is Mo’ne Davis. That’s right folks — that great pitcher we’re talking about is a girl.

Growing up in Philly, it was a cardinal sin for a boy to lose to a girl. It was a no-no to let a girl out-play, out-run or out-anything you in any sport. Girls were considered inferior, imperfect and incapable of competing with boys and thus were shut out. Girls were considered second-class citizens when it came to sports. Girls were not allowed to play in any games, much less any complete games, with their male counterparts. But that was then and this is now.

Now, there are two girls playing in this year’s Little League World Series: Philadelphia’s Mo’ne Davis and Canada’s Emma March. It is only the third time in the event’s 68-year history that two girls are playing in the same series. The first female to play in this tournament was Kathryn “Tubby” Johnston Massar who played in 1950, leading to a rule barring girls from playing. That rule was overturned in 1974.

“The legend of Mo’ne Davis, the 13-year-old girl with the 70-mph fastball, continued to grow Friday, as she became the first girl to throw a shutout in Little League World Series history. She might have grabbed the title of coolest kid in the world in the process, striking out eight and allowing just two hits while getting praised by the likes of Mike Trout and Lil Wayne.”

Wearing the Mid-Atlantic Region Jersey, Mo’ne handled the press like a seasoned veteran, as she helped her team to advance one step closer to fulfilling a dream that few boys, and much fewer girls for that matter, even dare to dream; winning the Little League World Series as a pitcher, and a dominant one at that.

I’m so happy for her. She’s from Philly — South Philly at that, and she has character and charm and charisma beyond her 13 yearling years. So let’s route for her and her team, for it seems that they have embraced her and encircled her and enriched her. And that’s wonderful to see.

Mo’ne Davis is a girl. And an African American girl at that, amongst a team of mostly white boys. She’s the talk of the town, the belle of the ball, and an inspiration and the motivation for thousands of youth athletes, everywhere. Now, especially because of her terrific talent and tenacity, and in spite of her sex and race, she’s not just a girl, she’s just one of the guys.