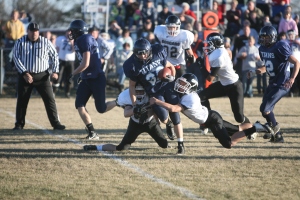 In the game of football, playing defense is fundamental.  It has been said that offense wins games, but defense wills championships.  On the way to becoming a champion, I believe that tackling, the elementary cornerstone of defense, must be mastered.  Tackle means to confront, block, grab, seize or bring down.  Grabbing an offensive player with the ball, hanging on, and bringing him down to the ground is a basic skill that is taught at the earliest ages and in the earliest stages of the game.  Without a good “run defense”, the opponent can run the ball at will, own the battle for time of possession, and essentially control the game.  There is good tackling and bad tackling, and the proper techniques are as old and as time-honored as the game itself.

When I played football in 9th grade, the coach tried to demonstrate to me that tackling a big man low is the only sure way to bring him down.  During a practice, after he saw me grab the star running back around the chest in a feeble attempt at bad tackling, he blew the whistle and stopped play.  My efforts were barely able to slow his progress.  Shaking his head and waving his arms frantically, he ran over to where I lay.  He took the time to show me the art of “staying low”.  I wasn’t as big as the guy I was trying to tackle, but the coach showed me that if I stayed low, grabbed him around the lower body, wrapped my arms and held on, I could bring him down.  That day I learned that you don’t have to be big to tackle, but you need to be determined to tackle.  I also learned that open field tackles are the most important, for in confronting an oncoming opponent, you could be the last line of defense.  In that case, one must decide and determine to be the one to stop the run.

Spiritually, many times we try to get a hold of our problems the wrong way. This is when the Holy Spirit blows the “whistle of grace” and stops us and endeavors to remind us that “we wrestle not against flesh and blood, but against principalities, against powers, against the rulers of the darkness of this world, against spiritual wickedness in high places”  (Ephesians 6:12).  The only way for us to stop the enemy from running negative, destructive thoughts through our minds is to get low.  We need to humble ourselves and pray. We need to get down on our knees, seek His face, and hold onto the promises of God with all of our might.  We must wrap ourselves around the Word of God and believe that His promises are true and amen.  This is a sure defense against the wiles of the devil.  This is the way we will be able to stop the enemy’s run.

What do you think?

4 thoughts on “Stop The Run”